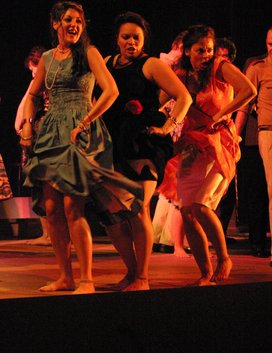 "Sophia has a lovely overall colour to her voice and a strong projection throughout a considerable range, an excellent artist". - Decca Records, UK.

"Sophia Grech gets to the core of the Emily Dickinson texts with rich tonal shading and deep poetic essence". -

"Sophia's Carmen was fiery and elegant, she has a big voice which she delivers without effort, displaying inner feelings and sensitivity". - The Sunday Times.

"The performers are all first class ambassadors for this new music".  - MusicWeb International.

"In Maltese Sophia has managed to adapt herself so tactfully in delivering Maltese language songs with diction and clarity that few can emulate'. - The Sunday Times. (Malta CD review - Mal-Kant-Tal-Bahar)

"The voice of celebrated mezzo Sophia Grech filled the auditorium with expressive vocal power.......the auditorium broke into applause at the close of every song which Grech handled graciously". - The Spectator Magazine, USA.

"Sophia Grech's voice is mellow and expressive, anyone not familiar with the Maltese language will get a good sense of it because she enunciates the words very clearly. The song 'Talba', is a prayer and the hymn of praise to God, which Grech renders to perfection. The next song 'Min Qatt Ma Ra' has a gentle contemplative, with a sad undertone that Great captures exceedingly well." - Lancaster Arts Journal, Canada. (CD review - 'Mal -Kant-Tal-Bahar')

"Sophia's programme was clearly constructed and she has a special gift for singing Spanish songs which showed her agility, tonal flexibility, good breath control and graceful eloquence. Her pure lines and gracious restraint did justice to the arias of Massenet. Sophia also has a captivating smile which helps her communicate so easily with her audience". -

"Sophia has the ability to move with great ease from a meditative to a festive mood, from a prayer to a protest, she establishes a warm rapport with the audience from the moment she takes the stage". - The Times. (Malta CD launch)

"Mezzo-soprano Sophia Grech gave a dramatic interpretation of the Rossini arias, this was a truly inspiring performance". - Aria Magazine, Spain.

"Sophia won the hearts of her audience with her voice and her charming stage presence. The listener was spellbound as Miss Grech worked her way through a demanding programme. The quiet authority that she brought to bear on the Liszt songs, especially, made one marvel afresh as to why they are so badly neglected. Her interpretation of these vocal gems was polished and sensitive", - Great Romantics Festival, (Dr Alan Walker, world-leading authority and author on Liszt)

"Sophia Grech brought warmth to the character 'Cherubino', her performance was sympathetic and colourful". -